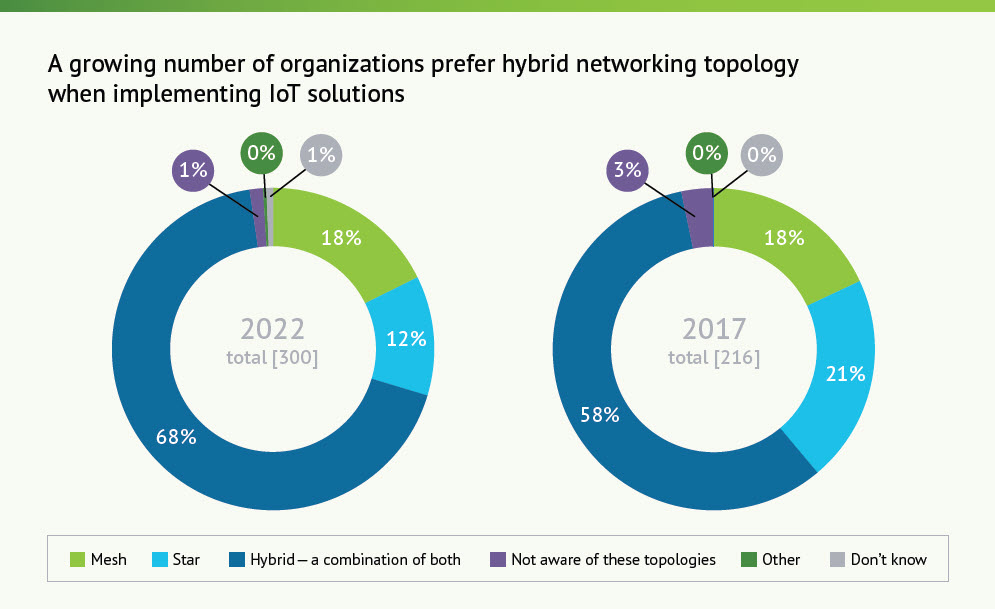 Tuesday, 29 March 2022 – The Internet of Things (IoT) is a top IT priority for global organizations for the next 12 months. But while the vast majority (92%) agree that they need to invest in IoT technologies in order to remain competitive, IT complexity and proven ROI are creating challenges. Delays and budget cuts due to the global pandemic have also had a more recent impact on project implementation.

These are the findings of a new report – The Journey to IoT Maturity – launched today by Wi-SUN Alliance, a global member-based association made up of industry leading companies driving the adoption of interoperable wireless solutions for use in smart cities, smart utilities and other IoT and industrial IoT applications. The report, based on interviews with IT decision makers (mostly c-suite and senior management) at UK and US organizations across a range of industries, including energy, utilities, government, construction, technology and telecoms, is the follow-up to Wi-SUN’s 2017 IoT study.

Overall, plans to roll out smart initiatives have grown in the last five years. Security and surveillance is the most likely IoT use case to be rolled out, with 87% of respondents very likely or definitely planning to deploy the technology in the next 12-18 months, up from 77% in 2017. This is followed by distribution automation (82% up from 74% in 2017) and advanced meter infrastructure (80% up from 68% in 2017).

“Five years ago the market was less mature with many smart city and smart utility projects still in their infancy. Our latest research shows that organizations are becoming more ambitious and sophisticated in their thinking – IoT is now a bigger priority than ever across all sectors, and the scale of what is being planned over the next few years is encouraging,” comments Phil Beecher, President and CEO, Wi-SUN Alliance. “But what’s clear is that the journey to IoT maturity isn’t without its stumbling blocks. Obstacles still remain and organizations, supported by IoT services and solutions providers and the industry as a whole, must work to overcome a mixture of technical and non-technical barriers.”

Shift in drivers for IoT implementation

The report highlights a change in top drivers for implementing IoT initiatives, although investment in IoT remains as crucial as it was in 2017. The need to gain a competitive advantage increased to 29% from 20% in 2017, but the need to reduce operational costs (27% vs. 38% in 2017) and create business efficiencies (25% vs. 42% in 2017) declined. This suggests a shift from using IoT to improve internal processes and operations to seeing it as an opportunity to stand out in the marketplace. There is also an increase in those saying it is driven by ‘everyone doing it or thinking of doing it’.

Almost half (47%) of all organizations have managed to fully implement their IoT strategy, lower than in 2017 (55%), possibly due to a growing understanding of what a ‘fully implemented strategy’ is and what it involves. This is also lower among respondents in the UK than in the US (39% compared to 51%) despite the UK being more likely to see IoT enablement as a top three IT priority for the next 12 months.

Overall, the number of respondents facing challenges to implementation has fallen – although not dramatically given the five-year time span between the two studies – but there is a rise in those admitting it is ‘extremely difficult’ to implement IoT (17% vs. 14% in 2017). This suggests that they understand the IoT (and its uses cases) better, but have higher expectations of what it can achieve.

A quarter (24%) of all respondents still believe security is one of the top three barriers to IoT adoption, but this is down from 58% five years ago. However, security and safety remains the most common technical challenge among respondents (42%). In addition, there are growing concerns over the complexity of IT infrastructure (34% up from 24% in 2017) and the need to see proven ROI (27% up from 17% in 2017).

Notably, Covid-19 has had an impact on project rollouts, with more than a third (37%) having to reprioritise spending, and 35% seeing budgets cut due to loss of revenue during the pandemic.

The biggest change for IoT adopters when considering a smart cities solution has been the importance of industry-wide open standards for IoT deployments. In the report, 86% of respondents feel that this is either very important or absolutely crucial, up from 78% five years ago, while 84% (up from 79% in 2017) believe the same when considering a smart utilities solution.

More respondents are demanding a lack of vendor lock-in as a specific feature in 2022 (78% up from 66% in 2017) reinforcing the need for open standards, which make it easier to integrate new IoT solutions, devices and software with existing infrastructure.

Another notable trend in the last five years has been an increased focus on mesh networking. IoT adopters are migrating away from exclusive use of star topologies (down to 12% from 21% in 2017) to hybrid networks (68% up from 58% in 2017) that include both star and more reliable mesh networks. This reflects an increased technical awareness of the technology options available and a maturing approach to IoT network planning.

Download the Wi-SUN Alliance State of the Nation report – The Journey to IoT Maturity – from: https://wi-sun.org/iot-maturity-model/

Wi-SUN Alliance is a global non-profit member-based association made up of industry leading companies. Its mission is to drive the global proliferation of interoperable wireless solutions for use in smart cities, smart grids and other Internet of Things (IoT) applications using open global standards from organizations, such as IEEE802, IETF, TIA, TTC and ETSI. With 300 members worldwide, membership of the Wi-SUN Alliance is open to all industry stakeholders and includes silicon vendors, product vendors, services providers, utilities, universities, enterprises and municipalities and local government organizations. For more information, visit: www.wi-sun.org.

Vanson Bourne is an independent specialist in market research for the technology sector. Their reputation for robust and credible research-based analysis is founded upon rigorous research principles and their ability to seek the opinions of senior decision makers across technical and business functions, in all business sectors and all major markets. For more information, visit www.vansonbourne.com.