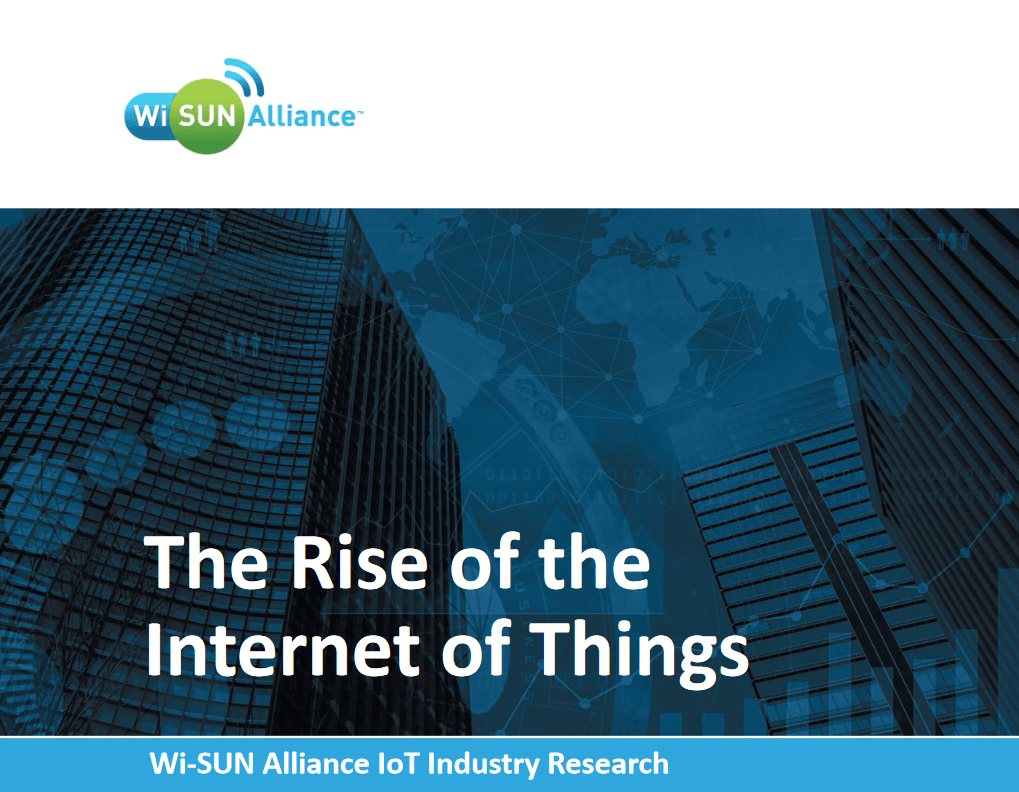 – but concerns over security, lack of funding and commitment

Morgan Hill, CA; 5 December 2017 – A new report by the Wi-SUN Alliance, a global member-based association driving the proliferation of interoperable wireless solutions for use in smart cities, smart utilities and other Internet of Things (IoT) applications, shows that half of organizations investing in IoT initiatives already have a fully implemented strategy in place, while more than a third (36%) have a partially implemented strategy. Companies are most advanced in the Oil & Gas industry, with 75% having a fully implemented strategy, followed by Technology (59%) and Energy and Utilities (57%).

A survey of 350 IT decision makers in the UK, US, Sweden and Denmark examining attitudes to IoT, including the drivers, barriers, challenges and benefits, the research highlights the growing number of smart utilities, smart cities and broader IoT projects in progress. While respondents report that enabling IoT is the second most important IT priority for the next 12 months, just behind improving security, almost all (90%) of those with an IoT plan at various stages of implementation have struggled to implement this, with over a third (36%) saying they find it “very or extremely difficult”.

When it comes to the key drivers for IoT implementation, around half (47%) of those surveyed report it will improve ‘network intelligence and connectivity for citizen safety and quality of life’, followed by ‘creating business efficiencies’ (42%) and ‘improving reliability of systems and services’ (41%). Two-thirds of respondents’ organizations with an IoT strategy report that it covers how IoT can be used to improve the customer experience, while six in ten say it includes a plan for continuous IoT improvement.

When asked what their organization looks for when evaluating IoT technologies, 58% of respondents look for network topology and coverage, followed by communications performance in terms of latency, bandwidth and bi-directional communication (53%). Other characteristics include support for industry standards (52%), while standardization is also important when it comes to choosing IoT in specific applications – 45% of respondents demand that smart city IoT solutions be built using industry-wide open standards, while 43% say it is absolutely crucial in a smart utilities.

“While all organizations taking part had IoT initiatives underway, it’s very encouraging to see that over half have an IoT strategy fully implemented, with the vast majority of those in sectors you’d most closely associate with smart city and smart utility initiatives, such as Energy and Utilities, as well as Oil and Gas companies,” according to Phil Beecher, President and CEO, Wi-SUN Alliance. “It’s also encouraging to see Wi-SUN supported by so many products and solutions out there and leading the pack in terms of networking technologies.

“However, there’s a lot of education still to be done for those looking to implement IoT, smart cities and other IoT initiatives, especially when selecting the right technology. For example, there are some fundamental advantages of Wi-SUN, including support for higher data rates delivering lower latency, mesh network configuration, increasing network resilience – and importantly, extremely robust security. Our advice for those developing, designing or procuring IoT, now or in the future, is to look closely at the reliability they need, the latency, and the security – and to make sure that these match up with the needs and goals of the organization.”

Commissioned by the Wi-SUN Alliance, the research was carried out by Vanson Bourne, an independent specialist in market research for the technology sector, in October and early November 2017. Interviews were done online and via telephone among 350 people in the UK, US, Sweden and Denmark. Respondents came from organizations that were at some stage of implementing at least one IoT initiative; specifically smart cities, smart utilities, or industrial IoT. Respondents were IT decision makers within their organizations and have some level of involvement with their organization’s IoT initiatives.

About the Wi-SUN Alliance

The Wi-SUN Alliance is a global non-profit member-based association comprised of industry leading companies. Its mission is to drive the global proliferation of interoperable wireless solutions for use in smart cities, smart grids and other Internet of Things (IoT) applications using open global standards from international standards organizations, such as IEEE 802, IETF, TIA, TTC and ETSI. With more than 170 members worldwide, membership of the Wi-SUN Alliance is open to all industry stakeholders and includes silicon vendors, product vendors, services providers, utilities, universities, enterprises and municipalities and local government organizations.